Clothes were always an element of people’s appearance and played an important social role as a message clear for everybody. It was not only a protection from cold and something to cover nudity. It was mainly a way of expressing oneself and emphasising the position in social hierarchy.

Colours were important, too. For example in China only the Emperor could wear yellow, and in ancient Rome only the senators could wear purple gowns.

Clothes carry a variety of messages concerning for example our income, social status, marital status, ethnic background, religious beliefs and many other aspects of life.

The messages were different in different cultures. It was obviously connected with the tradition, customs and location. In many parts of the world traditional clothes distinguish one social community from another. For example in Scotland, the type of the tartan cloth allowed to identify a person’s clan.

Elements of clothing characteristic for a given region or religion allowed to identify members of the society: for example a skull cap (yarmulke) – a traditional Jewish head cover, a turban worn by the Sikh, burka or hijab worn by Arabic women.

Clothes were also an expression of protest against the accepted social norms and beliefs, being a certain “manifesto of rebellion”.

“Clothes are an emanation of character, individuality, advantages and disadvantages. They tell everything about a man, his psyche, temper, dreams and desires. They form moods and states of mind. They work inside and outside, giving self-confidence, importance, competence.”

George Sand’s men’s clothing gave rise to the feminism. In the 20th century the change in female’s clothing introduced by Coco Chanel influenced the women’s position in society. Later very often social protest and belonging to a rebellious social group meant wearing specific clothes, as in the case of hippies, skinheads and punks. Rejection of certain elements of clothing can have a social meaning: for example rejection of higabs by the emancipated Arabic women.

In the 20th century in the western societies, clothes emphasised the sexuality and attractiveness of the sexes, but on the other hand the unisex style and trend  blurred the difference between them.

Law and social norms impose various standards of behaviour and clothing, depending on tradition and culture.

We have to see the difference between restrictions for clothing resulting from good manners and tradition. When we obey the rules of a certain place (for example, by covering legs and shoulders in catholic churches and head in mosques) to show respect for tradition, we are talking about good manners in a broad sense.

But when we are dealing with specific standards formed for a certain place or social group, we are talking about respecting the rules imposed by the specificdecision-makers it is dress code. That code can be very detailed and not always associated with the regular standards, especially when it comes to private territories, for example clubs with door selection, elegant places that require a tie and a jacket.

Depending on the company’s profile, dress code should be more or less formal. Business dress code is the company’s internal standard concerning the employees’ clothes, it is a part of the business etiquette.

We can observe the rules of formal wear becoming more and more defined. Dress code etiquette has become more formalized and commonly used. Nowadays clear and definite rules of business wear in Polish business start to emerge. The appearance of the employees during working hours can be defined in details even in the contract.

There is an exception to the dress code rules: Casual Friday. Corporations allow wearing weekend outfits on one day of the week, Friday. Depending on the company for men it means no ties, sports shoes, sometimes jeans. For women it means loose knitwear, jackets and skirts made of corduroy or jeans, no high-heels and casual shirts, tops or knitwear. But Casual Friday usually has nothing to do with employees of front office or customer service departments. 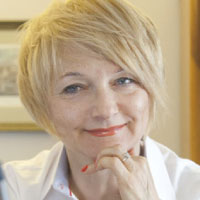 graduate of the University of Łódź, Law and Administration Department,

expert on business dress code in theory and practice,

recognizable fashion designer, awarded many titles including “Designer of the Year” or “Fashion Perfection”,

author of many articles and numerous trainings on business image,

We would like to introduce  the visitors of this site  to definitions connected with dress code and image in business as well as their meaning in marketing. END_OF_DOCUMENT_TOKEN_TO_BE_REPLACED

The visual message plays an important role in building the image. It appeals to emotions and subconscious associations. Nowadays we are observing a constant increase of the role of image in social communication. The so called “visual path” is very important for creating our image. „Fine feathers make fine birds” END_OF_DOCUMENT_TOKEN_TO_BE_REPLACED

We can say that the visual message is an important aspect of communication and helps to build relations. It is directed at 38% per cent of the recipients whose dominant communication channel is the visual channel. Hence the important role of the so called “good first impression”, the subjective reception of which is difficult to change. END_OF_DOCUMENT_TOKEN_TO_BE_REPLACED

Clothes were always an element of people’s appearance and played an important social role as a message clear for everybody. It was not only a protection from cold and something to cover nudity. It was mainly a way of expressing oneself and emphasising the position in social hierarchy. END_OF_DOCUMENT_TOKEN_TO_BE_REPLACED